One of the things I love to buy from eBay is linear power supply. Labs and industries routinely clear out older power supplies and many of them end up on eBay. And unlike many other used electronics, linear power supplies are well understood and relatively easy to fix. I recently picked up two none-working Global Specialties 1301A’s next to nothing and spent a little time fixing them up.

Here is a picture of one of the 1301A’s upon arrival. Both units had the power cords cut off, presumably because they were identified as faulty. 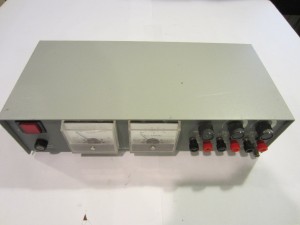 These units have been around for many decades and are clearly showing their ages. One of the things you do not see very often these days is the “proudly made in the USA” sticker on the back. 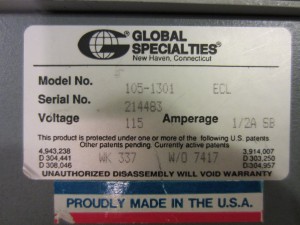 1301A comes with two independent 1.3V-18V 0.5A channels and one 5V 1A channel. It does not provide a lot of power, but this configuration makes it pretty useful in an electronics lab.

Here is a picture upon opening up one of the units. I was quite surprised to see the three LM317‘s. A LM317 was used for the 5V output as well (instead of a 7805). There was a blown capacitor (C10) and a coupe of charred resistors (R4 and R7) and clearly this was part of the issue why this particular unit was not working. 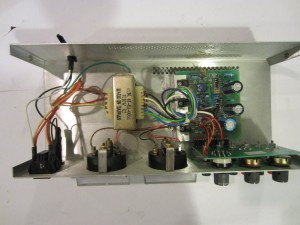 The picture below is a closeup of the regulator board. The burnt resistors measure at around 68 Ohms, and along with the 1K potentiometers, the adjustable voltage range comes to be between 1.25V and 19.63V. 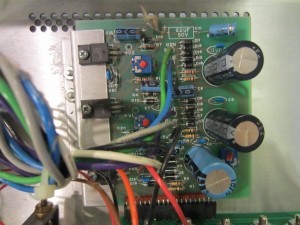 The choice of the voltage setting resistors is a bit perplexing. LM317’s reference design calls for a 240 Ohm resistor between Vout and Vadj pins. And most LM317 based power supplies adopt this value. In the 1301A’s however, this resistor value is significantly lower (68 Ohm). Unfortunately, this means that the power dissipation of this resistor is almost quadrupled (when the potentiometer is set to 0) which partly explained why they were burnt.

The potentiometers for both channels are faulty as well (open circuits). By opening up one of these faulty potentiometers we can see that there was a gouge near one end. Clearly, this power supply was extensively used in its days. 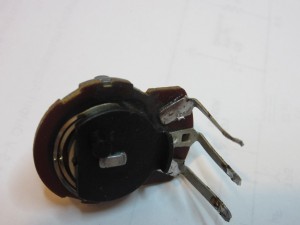 Here is a picture after I swapped out both potentiometers. 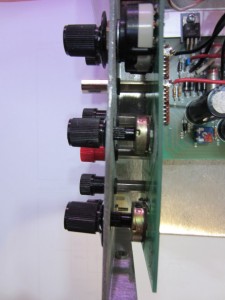 After replacing C10, R4, R7 and the potentiometers, the power supply comes back to life.