I got myself an HP 5350B microwave counter a couple of years ago and did a teardown of it. The backlight on the LCD is pretty weak and does not provide much contrast however. So I thought I would upgrade the backlight with a few white LEDs and see if I can make the display easier to read.

I did a similar modification to my HP 8642B a few years back and was encouraged by the results I got. So hopefully, I could achieve a similar result with the backlight upgrade on my HP 5350B.

The LCD module inside the HP 5350B is not particularly easy to get to. First I had to remove the entire front panel. Because the IF amplifier/detector (A6 module) is permanently welded onto the front frame, several screws that held the LCD panel in place are tucked behind the IF module and were difficult to remove.

Once the LCD module was freed however, it was pretty easy to remove the module from its casing. The LCD is driven by 4 PCF8576T universal LCD driver chips. I was a little surprised to see that the backlight was using 10 yellow LEDs, I guess I was expecting to see two incandescent bulbs instead. Anyway, these yellow LEDs are not particularly bright. The good news is that they are individually driven from the 5V power supply via a current limiting resistor array. So in theory I could just replace them with white LEDs without changing anything else. While the white LED has slightly higher voltage drop and thus there will be less current flowing through given the same resistor value, the white LEDs are much more efficient and should be much brighter than the original yellow ones.

Here is a picture showing one side of the LEDs replaced. Note that the backlighting mechanism here is simply shining light on the back of the translucent LCD panel. This arrangement is not as elegant as the tapered light spreader block used in HP 8642B which gives a more uniform illumination. So I expect the lighting to be somewhat non-uniform and gets darker towards center of the LCD. 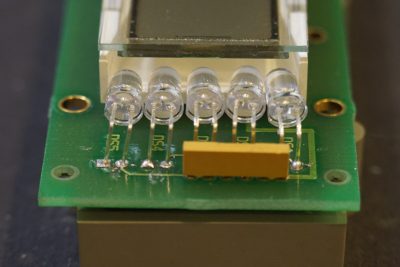 And here is a comparison between the original backlight and the white LED backlight. As you can see from the pictures below, the white backlight is a lot brighter than the original one and makes the LCD much easier to read.

Here is a short video clip showing the backlight upgrade: