As mentioned in my previous post, besides the broken LCD there was also an issue with the power supply portion of the unit and the output voltage was clamped at around 10 to 11V. The digital circuitry portion however seemed to be intact. Unfortunately since an identical LCD is virtually unobtanium, I thought I’d reverse engineer the LCD protocol so once the power supply is fixed I can fix the display by hooking up a different LCD. 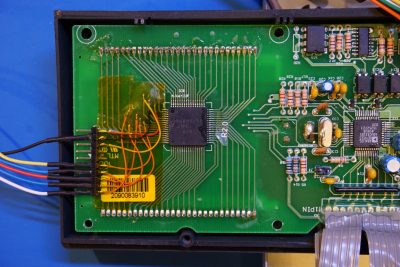 Once the logic analyzer is hooked up, I powered up the BK Precision 1696 using an isolation transformer and also connected the serial port to the computer so I could use BK Precision’s SDP software to control the power supply and obtaining the display data. This is extremely helpful as I would not otherwise be able to see what’s being displayed on the LCD at any given moment given the fact that the display was broken.

By setting the protocol to SPI and mapping SPI clock to the LCD driver’s SCL pin, MOSI to the DATA pin and SPI enable to the CE pin (it uses logic high as enable), I was able to capture the data packets sent to the display driver. As you can see from the capture below, the data frame rate is at roughly 10 frames per second. 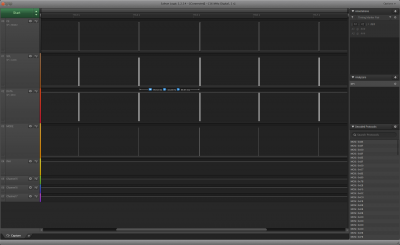 And here is a zoomed in capture showing an entire data frame. Note that the CE signal is not what you typically expect from a SPI protocol as there are technically two frames. The first frame, which coincides with the MODE assertion, is to set the transfer mode of the NJU6433F LCD driver. This frame contains 4 bits and is the same across all the data frames. The logic analyzer software seems to be able to happily ignore this half byte and decode the actual display data without a problem. 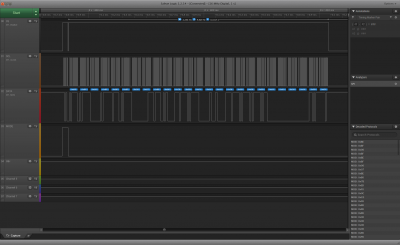 Once again, the picture below shows the captured data zoomed in even more. Each frame contains 25 bytes of data which are decoded into the decoded protocol pane. 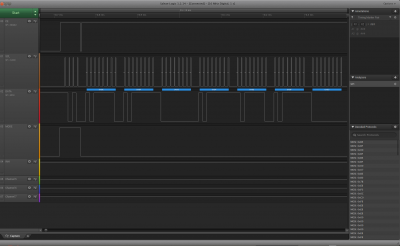 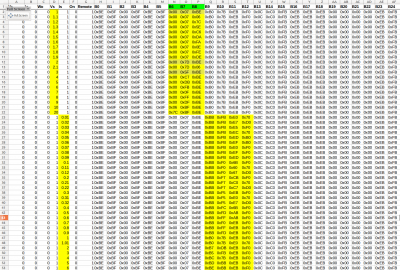 The next step is to analyze the data to see if there is any pattern to it. For instance, here are the sequence of set voltage captured and the change in data is observed in three bytes (B6 B7 B8).

With a little bit knowledge of how a 7 segment display works and by examining data pairs with only a single segment difference (for instance 1.0 and 1.8, 1.1 and 1.7 etc.) we can easily map out which bit corresponds to which segment (see below). Because there are eight bits, one of the bits in each byte is used for other purposes. The last bit in this group (B6 through B8) for instance is used for the decimal point. 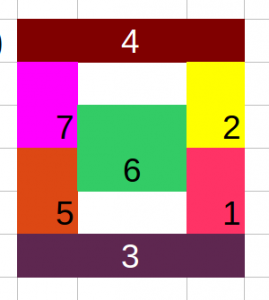 Here is a list of digit 0-9 and their binary and HEX representations:

This time the mapping is slightly different than what we saw with the set voltage mapping. By examining across all the captured data for current settings, we can see that the digit segment mappings remain the same but the start and stop location for the digit does not align with the byte boundary as we saw earlier for the voltage setting data.

The measured voltage readings map to our decoded numbers exactly, 0xFF corresponds to “8.”, 0xDE corresponds to “9”, and FA corresponds to “6”, the last bit is set (FB) since we do not have a decimal after 6, that bit is probably used for something else.

The last part we wanted to decode is for the measured current.

B3 B4 and B5 correspond to “4.”,”9″ and “9.” and again the last bit of B5 is clearly used for something else. So these three bytes are for the output voltage. The current reading is scattered a little bit. It took me quite some time to figure out how it is assembled in the bytes sent to the LCD driver. After analyzing all the relevant data captures, I figured out that the hundredth and thousandth digits are stored in B0 and B1 respectively. So for the current reading of 0.820A, B0 is 0x7C, which translates into “2” and B1 is 0xBF which translates into “0.”, again the last bit is not used for display purpose. The tenth digit “8” is stored in B23, you will need to swap the two nibbles to get the actual digit. In this case B23 is 0xEF and 0xFE is the representation for number 8. So the current reading “0.820” is captured in B0, B1 and B23.

Other information such as constant current indicator or OVP settings can also be derived using the techniques described above.

In the video below, I did an attempted repair moved on to decoding the protocol afterwards. I will provide more information as I make more progress on the repair.