Even though a lot of optimizations have been done in the .Net runtime to make it more efficient, it is apparent that scientific programming still favors C and C++ because that the performance advantage is huge.

Since Dmitri’s article has already captured pretty detailed data using the standard matrix multiplication algorithm, I will not repeat his findings in this article. What I intended to show was the performance data of uBLAS, OpenMP, cBLAS and MATLAB.

This is our reference code. Later on, I will only show the critical portion of the code and not repeat the common portion of code that initializes/finalizes the arrays. Similarly, the timing method used is also the same across all the tests and will be omitted later on.

Using OpenMP, we are able to multiple threads via the #pragma omp directives. For the simple algorithm we used here, the speed increase is almost proportional to the number of available cores within the system.

OpenMP With One Dimensional Arrays

Boost library provides a convenient way to perform matrix multiplication. However, the performance is very poor compared to all other approaches mentioned in this article. The performance of the uBLAS implementation is largely on par with that using C# (see benchmarks towards the end of the article). Intel’s Math Kernal Library (MKL) 10.1 does provide functionality to dynamically convert code using uBLAS syntax into highly efficient code using MKL by the inclusion of header file mkl_boost_ublas_matrix_prod.hpp. I have not tried it myself though, but the performance should be comparible to algorithms using the native MKL BLAS interface.

By default (without using MKL’s uBLAS capability) though, uBLAS is single threaded and due to its poor performance and I would strongly suggest avoid using uBLAS in any high performance scientific applications.

Intel’s Math Kernel Library (MKL) is highly optimized on Intel’s microprocessor platforms. Given that Intel developed this library for its own processor platforms we can expect significant performance gains. I am still surprised at how fast the code runs using cBLAS though. In fact, it was so fast that I doubted the validity of the result at first. But after checking the results against those obtained by other means, those doubts were putting into rest.

The cBLAS matrix multiplication uses blocked matrix multiplication method which further improves cache locality. And it is more than thirty times faster then the fastest OMP 1D algorithm listed above! Another benefit is that by default it automatically detects the number of CPUs/cores available and uses all available threads. This behavior greatly simplifies the code since threading is handled transparently within the library.

MATLAB is known for its efficient algorithms. In fact it uses BLAS libraries for its own matrix calculation routines. The version of MATLAB I have is a little dated (7.0.1), but nevertheless it would be interesting to see how its performance compares with that of latest MKL’s. MATLAB 7 is single threaded, and given the same matrix size, it runs roughly three times slower than the fastest MKL routine listed above (per core).

The following table shows the results I obtained by running the code listed above. The results are time in seconds. (note, S.TH means single threaded and M.TH means multi-threaded).

The following figure shows the results. Since uBLAS and single threaded matrix multiplications took significantly longer to compute, I did not include them in the figure below. 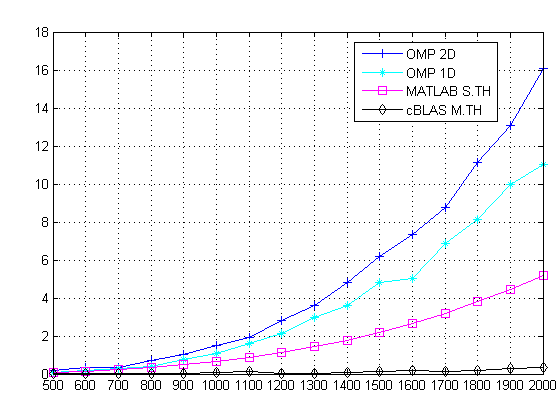 The following figure shows the same data but uses log-scale Y axis instead so that all the data can show up nicely. You can get a sense of various algorithms’ efficiencies here: 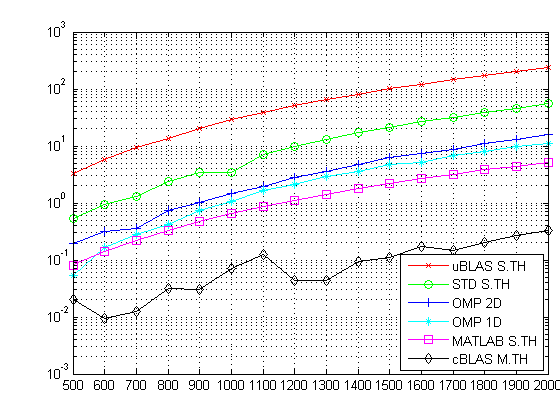