You can generate some pretty amazing patterns by shining a laser onto a mirror mounted on a vibrating speaker cone, a lot of people have experimented with this kind of laser show. But how about building a true laser oscilloscope that is capable of displaying signals? In this post, I will show you just that. For those who are impatient, I included a video towards the end.

An oscilloscope has two axes. So our laser oscilloscope must be able to deflect the light beam in both X and Y directions. To do this, two actuators are needed. The way I constructed mine is shown in the pictures below:

A rod (must be made of none magnetic material) was glued onto the cone of the speaker using epoxy at an angle. So when the speaker vocal coil is energized, the vertical movement of the speaker cone translates into the vertical movement of the rod. The other end of the rod was glued onto one axis (one edge of the mirror). Another set of identical actuator mechanism was used to control the other axis. A long screw was used as the support point of the mirror. The length of the screw was chosen so that the mirror sits on the screw tip and can rotate about freely. The picture on the right above shows this configuration.

Gluing the two rods onto the mirror while adjusting the height of the screw is perhaps the hardest part of this build.

To drive each channel, a signal source capable of driving a low impedance load is needed. Most signal generators are designed to drive load with a resistance of 50 Ω and higher, so in order to use signal generators to drive either channel I used two TDA7052 BTL audio amplifiers (I happened to have a few of those lying around. Pretty much any audio amplifier will do the trick) to build a two channel audio amplifier. The picture below shows the experiment setup (the laser I used was a Helium-neon laser, but you can use a laser pointer as well so long as you can mount it on a stationary fixture). 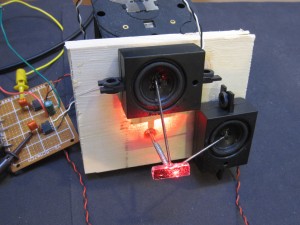 Due to the added mass, the optimum operating frequency of the speakers are well below 500 Hz. I chose 100 Hz for the x-axis rate. The output volume is adjusted so that the scan line remains flat when no signal is present at the y-axis. 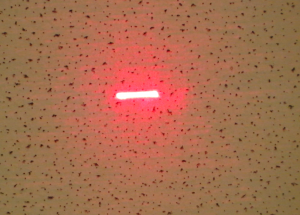 Here is a short video further discussing the experiment.