In electronics, guarding is a technique typically used to prevent or minimize current leakage from a high impedance source. This method is widely used in many low level measurements especially in low current and high resistance measurements.

When doing low current measurement using a picoammeter or electrometer, the guard is typically the LO input terminal of the ammeter. Because both electrometer and picoammeter utilize the feedback ammeter technique, the burden voltage is extremely low (usually in several hundred μV range) and the leakage current between the HI and LO terminal is thus negligible. Since the LO terminal is essentially floating, any leakage current between LO and the ground terminals will flow through LO and thus does not affect the measured current.

Guarding is usually implemented using a voltage follower. In this configuration, the voltage difference between the positive and the inverse inputs of the Opamp is very small and the Opamp output voltage is held at almost the same potential as the positive input. 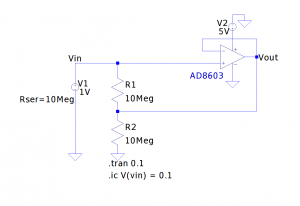 The voltage source we used here has an output impedance of 10 MΩ, which is comparable to the leakage resistance. Thus if the output voltage is measured directly, the measured value would be lower than the actual source voltage due to the current leaking through R1 and R2. If however, we add in the voltage follower and use its output to drive the shield (junction of R1 and R2), the voltage across R1 would be roughly zero and thus the source voltage measured at the positive input of the Opamp would not be affected by the cable leakage resistance R1.

Of course in this example, the loading effect of the voltmeter must also be taken into consideration due to the high impedance nature of the source. Typically we will need to use an electrometer for this kind of task.

Guarding also improves the measurement settling time. Any capacitance between the center conductor and the guard can be ignored as they voltage across this capacitor is negligible. Thus no significant charging/discharging would occur.

You can see a couple of related experiments in the video below:

When to use an electrometer