In this blog post, we are going to take a look at Electronic Development Corporation’s (EDC, acquired by Krohn-Hite in 1998) MV216A battery/external powered DC voltage standard and also measure its voltage reference’s temperature coefficient (tempco). A teardown video is also included towards the end. MV216A is a six decade precision DC voltage standard, it can output from 0.1µV in 100mV range all the way up to 11.1111V in 10V range. Voltage standards of this caliber are usually used as calibrators to calibrate multimeters and other test instruments.

Dave Jones at EEVBlog did a teardown of a similar voltage standard MV106J a while ago. MV106 has three output ranges, 10mV, 100mV and 10V. Another similar voltage standard by EDC (Krohn-Hite) is MV116. The main difference between MV116 and MV106 is that the output ranges for MV116 are 100mV, 1V and 10V instead. While I could not find any information on MV216, it is presumably very similar to MV116 specification wise. As you will see later, the only difference appears to be the power supply design, which had external battery supply and internal battery charging in mind.

The front panel of the instrument looks almost identical to those of MV106’s and MV116’s, except for the extra meter indicating the battery charging level and a couple of extra status LEDs. On the back of the unit, there is a 5 pin DIN connector for external DC power input.

Upon sliding off the top cover, the internal layout is revealed. It appears rather barren. The internal battery is clearly missing but it does not impact the performance of the voltage standard in any shape or form. From the date codes on various components, we could infer that this unit was made sometime in 1979 in an era where personal computers were still non-existent. 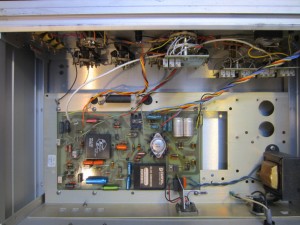 Taking a closer look at the power supply portion of the circuit, you will notice that it is slightly different than the circuits for MV106 and MV116. Instead of using two complementary voltage regulators for the positive and negative rails, a DC-to-DC converter is used. This is largely driven by the option of using battery power as it is more convenient to convert a single voltage into the needed positive and negative rails than having to have two sets of batteries.

To switch between the AC power and the external DC power, a crude but rather effective circuit is used. The two bridge rectifiers prevent voltages from either of the outputs back-feeding into the other source, and essentially isolate the external battery and the transformer circuit. As an added benefit, the polarity of the external battery does not matter as it goes through a full bridge rectifier. But the downside of this circuit is that the battery power would be less efficient than ideal as it suffers two forward voltage drops of the rectifier diodes. 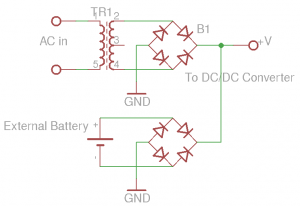 Here are a couple of close-up pictures of the DC/DC converter and the chopper stabilized operational amplifier.

In the picture below, you can see the heart of this precision instrument: the voltage reference. MV216A uses the same 1N829A Zener diode as in MV106 and MV116. The highest grade of 1N829A is specified for a maximum temperature coefficient of 5ppm per degree. 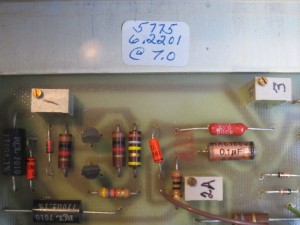 The switch contacts are a bit oxidized due to the 30+ years’ vintage of this instrument. The contacts are silver plated, so they should be fairly easy to clean using some 99.9% IPA. 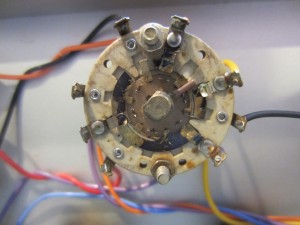 Here are a couple of the pictures showing the calibration trimmer potentiometers and some precision resistors.

The picture to the left below shows the precision resistors soldered onto each decade switch. These resistors are not only highly accurate (with tolerance as low as 0.005%) but have very low temperature coefficients as well. The picture on the right shows the output terminals and the sensing terminals. These terminals are most likely all constructed with gold plated Beryllium copper to ensure excellent thermal and electrical performance.

Here are two pictures showing the back side of the board. Like most PCBs in its era, all tracks were tin-plated. You can clearly see where the battery wiring was removed from, towards the top left in the picture to the right.

In the video below, I did a teardown and some testing of the MV216A and also measured the temperature coefficient of the reference Zener diode. To measure the Zener diode voltage, I used a Keithley 196. At 23°C the voltage across the Zener diode was 6.22008V and at 47.5°C, the voltage was 6.22027. The tempco can be calculated as:

So the measured tempco is much better than the rated 5ppm per degree.