I picked up an autoranging True RMS multimeter from ennoLogic a couple of weeks ago. Before this purchase, I actually had never heard of ennoLogic. But the design and spec of the meter looked quite good and the selling price was not bad for a 6000 count meter at all. So I bought one to try out.

The meter was packaged in a generic box with a stick-on ennoLogic label. From a first glance, this looked like a re-badged product as most name brands pay much more detail to their products packaging. 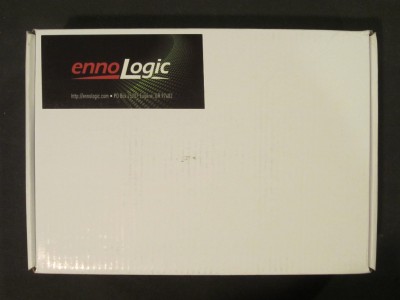 The meter and accessories are inside a nice little pouch. It even came with a very detailed color-printed user manual. The included K-type thermocouple does not come with the standard thermocouple leads however, instead it uses the standard banana plugs. 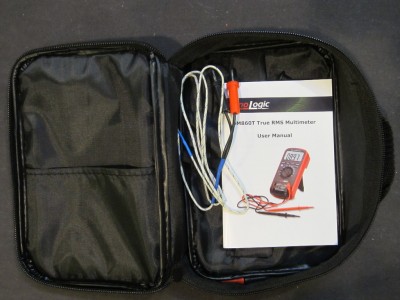 The meter itself looked very sturdy. It is significantly larger and heavier than my BK precision 2709B, the picture below shows these two meters side by side: 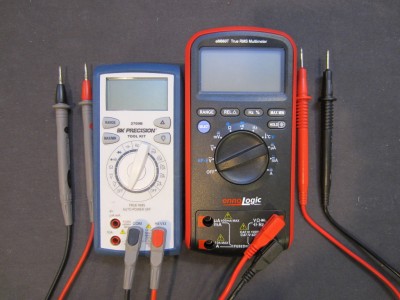 The contrast of the LCD is pretty good although BK precision 2709 probably has slightly better viewing angle. The white LED backlight of this meter looks gorges.

The range switch feels solid. It is a bit on the stiff side however, making it difficult to switch ranges with one hand if not pressing hard on the meter. I do like the separate V and mV ranges. This makes some routine measurements much more convenient. For comparison, on the BK 2709B measuring using the mV range requires pressing the range button 5 times. Further more, eM860T has two ranges (60mV and 600mV) in mV position. This means that you get one extra decimal when measuring voltages under 60 mV (e.g. two decimals instead of one).

With an update rate of 3 readings per second, eM860T feels faster in most of its ranges compared to the update rate of BK 2709B. The resistance range is a noticeable exception however. When in auto-ranging mode, range switching in resistance mode is painfully slow. It takes almost 3 seconds for the meter to cycle through all the ranges before settling on a final reading which is considerably slower than the almost instant range-switching of the BK 2709B in resistance mode.

The following is a picture showing the inside of the meter with the back cover removed. Note that the 9V battery sits in a separate compartment which can be accessed by removing two threaded screws on the battery panel on the back. As you can see, the PCB is well made and most components are surface mounted. 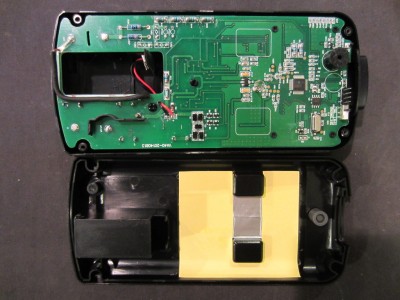 Here is a closeup of the main chip DTM0600L (the only documentation I could find was in Chinese), which handles all of the measurements of the meter. The 2K EEPROM (24C02A) stores all the calibration constants and configuration parameters. As far as I know, there are quite a few other multimeters (such as Tekpower TP40, UNI-T 139C and Velleman DVM4100) also use the same IC. 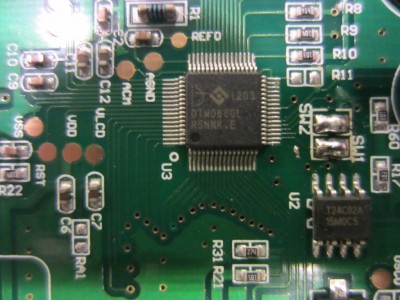 The main processor and the EEPROM is powered by 3V via a linear regulator (shown below). I am curious as to why they decided to use a 9V battery rather than say 2 AA batteries as the operating voltage for DTM0660 can be as low as 2.4V. That said, you can run the 9V battery all the way down to below 4V before the regulator loss its regulation. So given the relatively low current consumption at just around 1.5 mA, even a 9V battery should last a long time. 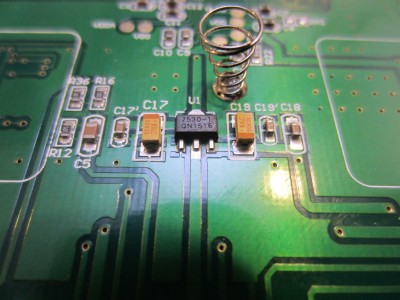 Towards the top of the PCB, there was a populated header for I2C. The inclusion of a calibration switch indicates that all calibration is done in software, not via hardware. 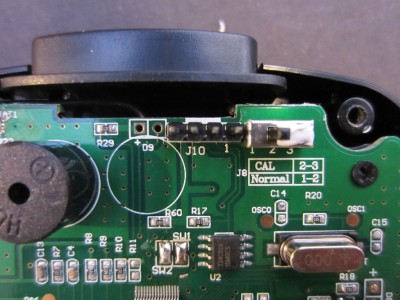 Here is a picture showing the PCB removed from the case:

Here is a close up of the two massive HRC fuses. These high rupturing capacity fuses are necessary because this meter is CAT IV rated. I have not seen many multimeters in this price range (around $65) with a CAT IV rating.

For most electronics work, a CAT II rated multimeter is more than adequate. If you have the occasional need to measure voltages in a distribution box, then you will need a CAT III rated meter. So a CAT IV meter is probably an overkill for most hobbyist but the added safety gives you extra confidence when working on mains connected circuits.

The input jacks are soldered directly onto the board, which does raise some long term reliability concern. That said, if designed correctly, these jacks should withstand the forces applied during normal use. 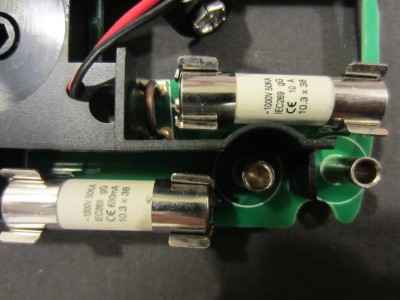 Here is a picture with the meter further dissembled: 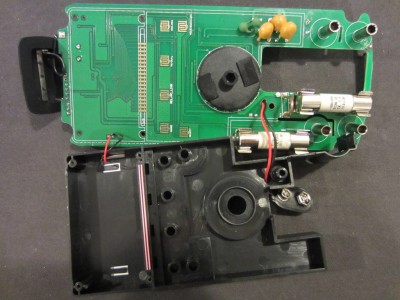 You can clearly see the robust input protection circuitry here: 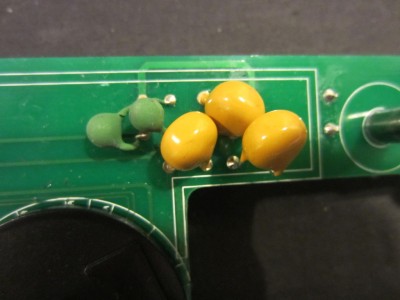 And in the picture below, you can see the reverse side of the PCB. The marking on the etched contact switch is intriguing. The second switch is labeled “REL/PC Link”, so presumably this board is used for the RS232 version of the meter as well (although this is the only ennoLogic meter I have seen so far). 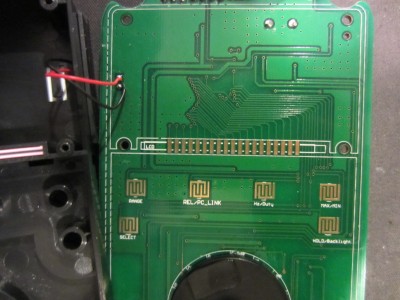 One thing I didn’t quite like about this meter is its NCV (non-contact voltage detection) feature. When in NCV mode, any static discharge (even just by touching the top of the meter) would cause the meter to beep. And when a 120V live wire is placed near by, the detector is actually not sensitive enough to detect it. During my experiment, the only way that I could set off the NCV alarm consistently was to place the wire directly against the detection surface towards the top.

For the price of the meter though, it remains an excellent choice if you can stand the slow resistance measurement and the not-too-useful NCV function.