In my previous post, I discussed why it is beneficial to use linear MOSFETs in electronic load and performed a couple of experiments using a single IXYS’ IXTK90N25L2 linear MOSFET. The electronic load was able to dissipate around 150W before the case temperature of the MOSFET reached 90°C.

One issue with this aluminum block I am using as I mentioned previously is that it’s surface is a little bit rough, which hinders heat dissipation. So I sanded it down a little bit with a planer sander using some fine sand paper.

Last time, I also used a mica pad underneath the MOSFET to insulate its drain from the heatsink. This time around though, I decided to remove the insulation layer altogether. This means that the heatsink would be connected to the drain directly. This shouldn’t be of an issue for testing purpose as long as I don’t short anything with the heatsink.

Another change I made is using a copper block as an intermediary medium between the TO-264 packaging and the aluminum heatsink. Since copper’s heat conductivity is almost twice as high as that of the aluminum, it should help spreading the heat into the heatsink faster and thus lower the thermal gradient between the packaging and the heatsink. Ideally a large copper heatsink would be even better, but I don’t have one on hand. The picture below shows how the MOSFET was mounted onto the heatsink:

The overall circuit arrangement is largely the same as what I had previously. 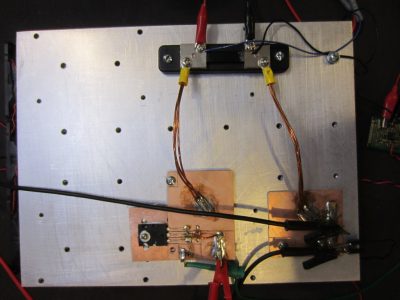 Here is a short video showing the updated experiments: