Power MOSFETs are widely used in switch mode applications such as pulse width modulated electrical motor controllers and switching mode power supplies. While they are also routinely used in linear mode applications such as power amplifiers and linear power supplies, standard MOSFETs are prone to secondary breakdowns due to hot-spotting or current focusing when operated in linear mode.

In fact, many of the power MOSFETs such as the popular IRFP150N do not include DC operation characteristics in its FBSOA(Forward Bias Safe Operating Area, or simply SOA) specifications. While operating in current-saturated region the drain to source on-resistance (Rdson) exhibits temperature coefficient which allows easy current sharing among many paralleled devices, when operating in linear region however, Ids (drain-to-source current) tends to increase due to the negative tempco of the gate threshold voltage below the zero temperature coefficient point. This in turn further increases the die temperature and without negative feedback, this leads to hot-spotting or current focusing (thermal runaway) and eventually the destruction of the device.

For this reason, the number of paralleled MOSFETs are typically over-provisioned to ensure that each individual MOSFET operates well within its SOA boundary. The above described limitations are analyzed in detail in this application note (AN-4161) and also documented here. For example, the electronic load I built a few years ago used six MOSFETs in parallel and achieved a maximum power dissipation of 200W. I tested a few of the IRFP150N’s individually in linear mode and they all failed when the power dissipation reached between 45W to 60W.

There is a class of so called linear MOSFET (e.g. IXYS‘ Linear L2™ MOSFETs) which is specifically designed to operate in linear region with an extended FBSOA. So in theory, they would be perfect for using in an electronic dummy load.

To find out how well these linear MOSFETs would perform I decided to purchase a couple of IXTK90N25L2‘s (they are quite pricey) and perform a few tests.

IXTK90N25L2 comes in TO-264 packaging. It has a Vdss of 250V and Id of 90A. It has a 575W SOA power dissipation rating (this is for pulsed operation, for continuous operation the maximum Pd is limited by the junction temperature). Realistically, due to the thermal resistance of the packaging (RthJC + RthCS = 0.13+0.15 °C/W) and the additional thermal resistance from thermal grease and heatsink the maximum power a single TO-264 device can dissipate is likely just around 250W. 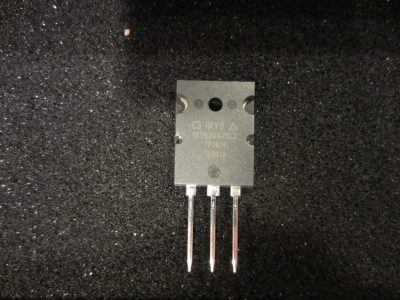 The circuit I used to drive the MOSFET is largely the same as what I used previously. But since I wanted to be able to sink large current (tens of Amps), I used a 50A/75mV current shunt as the current sensing resistor. Since the voltage drop across the shunt resistor is very small (1.5mv/A) a low input offset, rail-to-rail OpAmp is necessary to ensure accurate current setting. Among the OpAmps I have, LT1636 seems to be a good choice as it is rail-to-rail, has low input offset and has a wide Vcc range. The test circuit is shown below. The control voltage comes from my EDC/Krohn-Hite MV216A DC Voltage Standard. 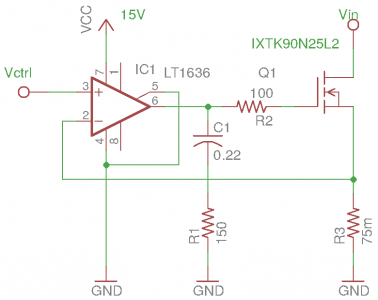 And the picture below shows the experiment setup. I mounted the MOSFET on a large aluminum heatsink block. The surface of the block is not as polished as the one I used in my previous electronic load build, this will likely affect the maximum power dissipation a bit. Nevertheless, it’s largest heatsink I have on hand. The wires connecting the current shunt are three 14 AWG copper wires paralleled together which should allow carrying at least 60A of current. 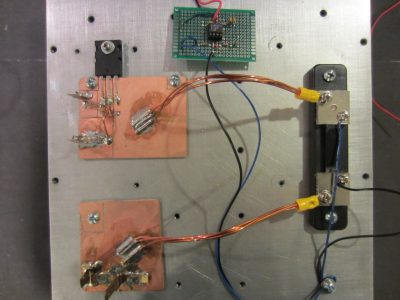 In the video below, you will see my experiments in detail. First, I tested the load using a 15V 10A power supply and I was able to sink 150W continuously and the case temperature rose to about 90°C. Then I tested a switching power supply and was able to sink more than 55A from its 3.3 rail. These results are quite impressive considering this is with just a single MOSFET. So clearly, IXTK90N25L2 is an excellent choice for building high power electronic load. Although these linear MOSFETs are expensive, using them in an electronic load can reduce circuit complexity as fewer is needed to achieve the same power sinking capability, and at the same time increase reliability due to their guaranteed FBSOA.

When I find a suitable copper heatsink I will do the same tests again and I think it can sink at least 50 more watts given lower heatsink thermal resistance.

19 Thoughts on “Linear MOSFET and Its Use in Electronic Load”