I bought six Philips dimmable LED bulbs for my dinning room chandelier last year. These are 45W incandescent equivalent (7W, 450 lm 2700K) and are supposed to provide years of trouble-free illuminations. Over the course of a year of light use however, they all exhibited the same failure mode at some point of time. Two months in, the first bulb failed. The bulb would initially turn on, but after a few minutes it would turn off by itself. If the power is recycled the light can be turned back on again but only for a short period of time, and the cycle continues. 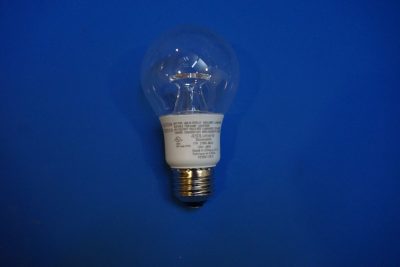 The most likely cause for this behavior is overheating. Light bulbs are typically mounted in downward pointing positions, but for chandeliers the light bulbs are usually mounted pointing upwards. The mounting position likely added to the stress caused by excessive heating as the heat is rising through the circuit board where the LEDs are mounted as opposed to dissipating away from them.

One of the first things you will notice about this light bulb is that the compact construction. Most noticeably the lack of the telltale heatsink fins. As a result however, the heat dissipation capability is greatly sacrificed. During normal operation when mounted pointing downwards without any airflow obstruction, the case temperature raised to above 60°C within a few minutes. I could only imagine what the temperature would be like when the light bulb is mounted facing upwards in a semi-enclosed light fixture.

So I decided to take it apart to see the what the construction looks like inside. The bulb itself is actually made of glass instead of plastics. And the middle section where the electronics are enclosed is made from aluminum which is connected to the LED aluminum board. The enclosure serves as a heat sink. Since the aluminum housing is covered with plastics, the thermal efficiency is poor. 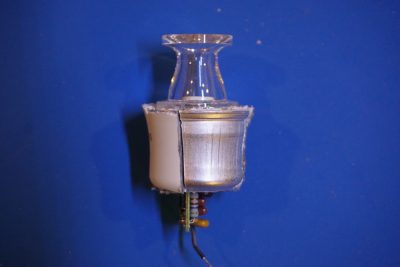 From the picture below, you can see that all components used are discrete. Using discrete components probably drives down the cost, but the simplistic design also means that there is no power factor correction circuitry built in. The power factor is measured at around 0.75 during operation while not unreasonable but certainly not great. In the middle section you can see some darkened area. This could be flux residue but could also be a result from the excessive heating. 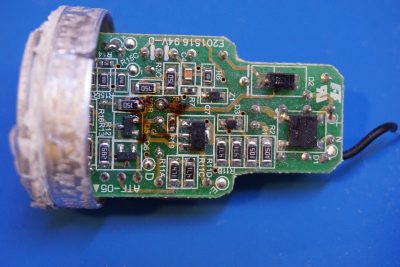 Here is a picture showing the other side of the PCB. The main output filtering cap is rated for 35V, 105°C. The voltage rating is barely adequate as the output voltage is at around 32V. 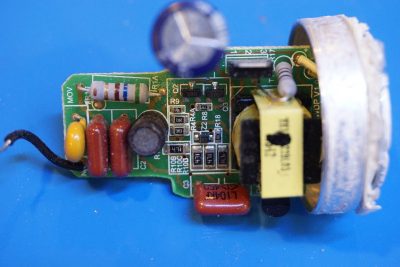 Perhaps the most interesting thing about this LED bulb is the arrangements of the LEDs. Among the seven LEDs seen below, five are power LEDs (1W?). They are connected in series and the operating voltage across all five LEDs are measured at around 32V. These five LEDs are the ones producing light when the supply voltage is above 60V. And then, between 60V and 40V, all seven LEDs are illuminated. Below 40V, the 1W leds are all turned off, leaving only the two smaller LEDs turned on. And the light is totally off when the supply voltage drops below 20V. 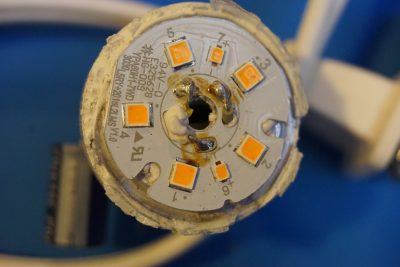 This is a really interesting way of achieving dimming over a wide range of brightness. One clear draw back is that the two smaller LEDs are almost never used if the the light is only used towards the full brightness.

The following is a short video showing the teardown:

One Thought on “Teardown of a Philips Dimmable LED Bulb”