I got a couple of Microsemi’s C900502 10.525 GHz X-band Doppler radar motion sensors a while ago. This batch was made in UK and had “UK patents 2243495 and/or 2253108 apply” printed on the case. I have seen a teardown of an HB100 Doppler radar module before and was wondering if I this one is any different inside.

The C900502 transceiver has a very sturdy metal casing. It is measured at roughly 5cm by 5cm by 1cm. The transmitter and receiver antennas are patch antennas etched directly onto the PCB as you can see from the picture below: 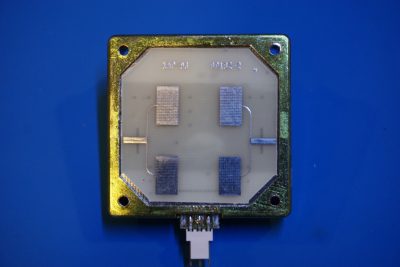 On the back side you can see the patent number stamped onto the casing. There is an adjustment hole underneath the model number sticker. Using a screw driver, you can make fine adjustments of the transmitted frequency. Using this module is simple and only three connections are required: +5V, ground, and IF output. 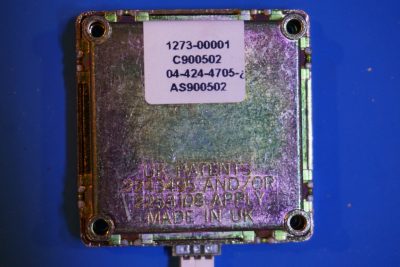 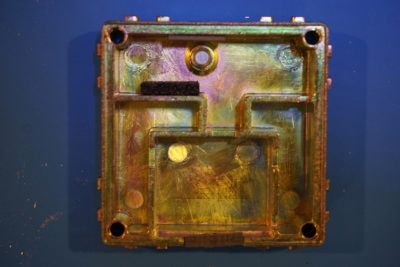 And here is a picture of the circuit board. It is surprisingly elegant, only 5 discrete components (two active components and three passive components) are used. The board layout is strikingly similar to that of HB100. Perhaps HB100 is based on the same patents? 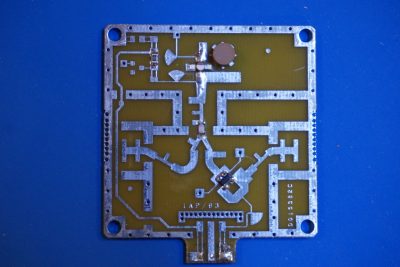 where the relative permittivity of the dielectric material is usually between 30 and 50. Barium titanate (BaTiO3) is a common material used for the dielectric resonator.

You can also see many distributed element filters on the PCB. Here you can see two radial stubs. 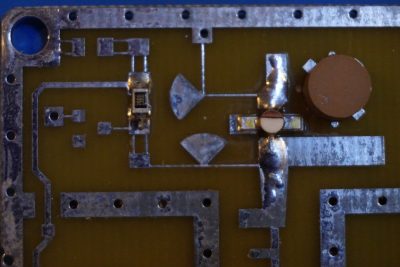 Here is another picture of the dielectric resonator oscillator. The cylindrical resonator has a radius of 2.48 mm and is roughly 3 mm in height. The actual resonant frequency is slightly different than what is obtained from the equation mentioned earlier due to the fact that the oscillator is inside a shielding cavity and the cavity affects the surrounding field of the resonator. This changes the boundary condition and causes the resonate frequency to shift. The screw for fine-tuning the oscillate frequency works in a similar fashion. 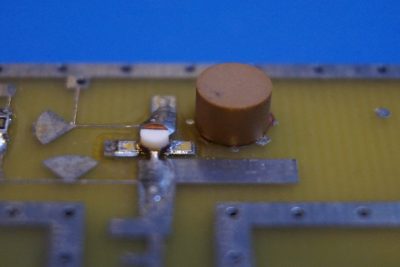 The picture below is the closeup of the mixer. Again, mixing is achieved via a single active device (either a transistor or a FET). You can clearly see the branching of the oscillator signal towards the top center. One branch forks to the left and goes to the transmitting antenna. The branch to the right goes into the mixer as the LO frequency. At the same time the antenna on the right receives the bounced back signal which also enters the mixer. If the object from which the transmitted signal bounced back is moving, the received frequency would differ from the LO frequency and thus a beat frequency is produced at the output of the mixer (IF). By measuring the frequency of the IF, we can calculate how fast the target object is moving due to Doppler effect. 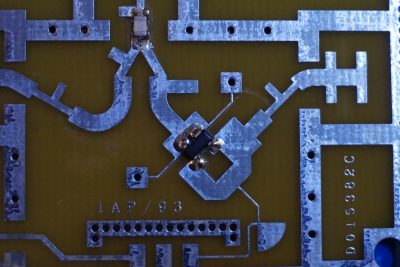 It is worth mentioning that the antennas are not physically connected to the circuit. Signals are coupled through slots on the ground plane into the antennas. Again you can see a lot of distributed filtering, impedance matching and transmission lines throughout the board.

The following is a video of this teardown along with some experiments.

4 Thoughts on “Teardown and Experiments with a Doppler Microwave Transceiver”