As I mentioned previously, Amrel PPS-2322 (dual 32V/2A) does not have a fan controller so the fan is on whenever the power supply is on. The fan noise can become quite annoying and distracting. So I built a simple fan controller which would turn the fan on and off automatically depending on the heatsink temperature.

Here is the schematics for the temperature controlled fan controller, it is essentially the same as the one I built for my Topward 6603A except that a MOSFET instead a relay is used to switch the fan directly. This circuit is essentially two independent temperature controllers or’d together at the output. Each heat sink (for channel one and channel two) has its own thermistor, and the fan would be turned on if either side gets above the threshold temperature. 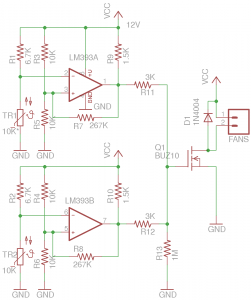 In the video below, I did some testing of this power supply using the electronic load I built earlier. Towards the end of the video, I showed the fan operation after the fan controller was added.

PPS-2322 has over current protection capability in addition to the current limiting feature. Unlike current limiting mode, in which the output current would be clamped at the preset current after the maximum current is reached, the over current protection mode will “trip” the power supply and cutoff the output when the preset threshold is reached. This will help protecting circuit under test if the excess increase in current is due to a circuit malfunction.

Another thing to note is that there doesn’t seem to be any adjustable potentiometers inside the power supply, so it is likely that all calibration data is stored in the EPROM during the calibration process.